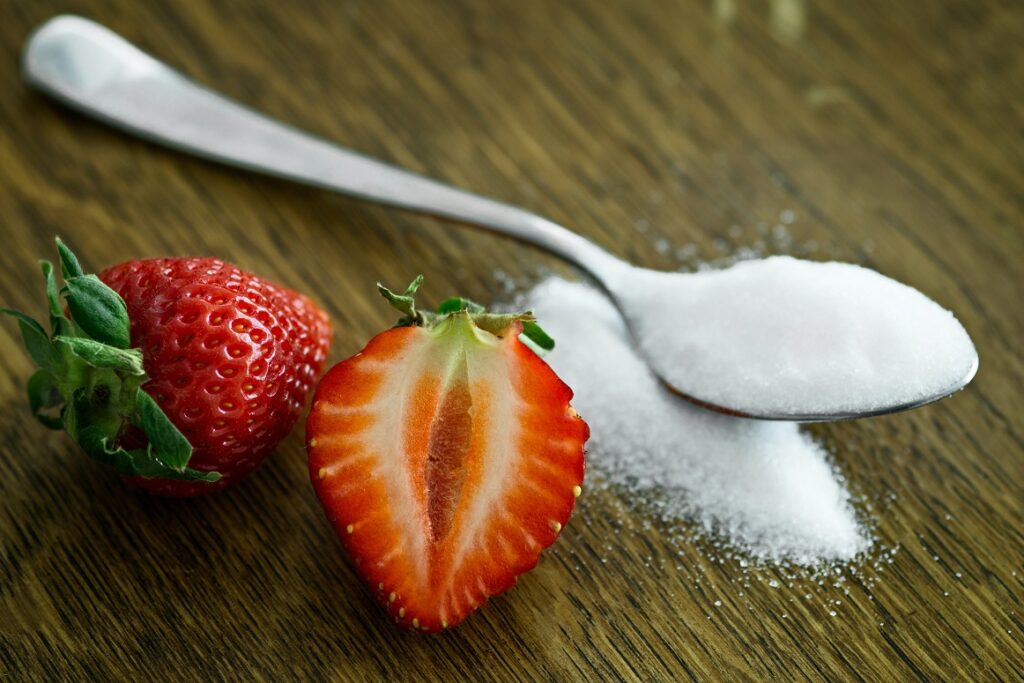 Over the centuries, this crystalline sweetener has invaded everyone’s snacks, drinks, guts, and minds. It has caused its fair share of controversy, too.  Although everyone is familiar with sugar as a concept, we’ll start with a brief explanation.

Sugar is a soluble carbohydrate — a biological molecule consisting of carbon, hydrogen, and oxygen atoms. Other carbohydrates include starch and cellulose, which is a structural component of plant cell walls.

Still, the chemistry of sugar does not explain its infamy. The substance gained its dastardly reputation because it tastes delicious and, if consumed too freely, is bad for our health.

Some experts believe sugar is an addictive substance. For instance, the authors of a controversial narrative review in 2017 write:

However, this review focuses on animal studies. As the authors of another review explain, “there is a methodological challenge in translating this work because humans rarely consume sugar in isolation.”

Dr. Dominic M. Dwyer from Cardiff University’s School of Psychology explains, “Although certainly present in some people, addiction-like behaviors toward sugar and other foods are present only in a minority of obese individuals. However, we should remember that sugar can drive the overconsumption of foods alongside its addiction-like potential.”

Along similar lines, Prof. David Nutt, Chair of the Independent Scientific Committee on Drugs and head of the Department of Neuropsychopharmacology and Molecular Imaging at Imperial College London, writes:

“There is not currently scientific evidence that sugar is addictive, although we know that sugar has psychological effects, including producing pleasure, and these are almost certainly mediated via brain reward systems.”

It is worth noting that even though health experts do not class sugar as an addictive substance, that does not make it healthful.

This is perhaps the most common myth associated with sugar: eating candy causes children to run wild. In fact, there is no scientific evidence that sugar increases hyperactivity in the vast majority of children.

For instance, a 1995 meta-analysis in JAMA combined data from 23 experiments across 16 scientific papers. They concluded:

“This meta-analysis of the reported studies to date found that sugar (mainly sucrose) does not affect the behavior or cognitive performance of children.”

However, people with children may doubt the truth of this conclusion. For those interested in reading more, we address this myth extensively in an earlier edition of Medical Myths.

Another relatively common myth is that sugar directly causes diabetes. However, there is no direct link between the two. The confusion perhaps arises because there is an intrinsic association between blood sugar levels and diabetes.

The story is a little more complicated, though. Overweight and obesity are risk factors for type 2 diabetes, and consuming high levels of sugar does increase the likelihood of developing overweight or obesity. However, sugar is not the direct cause of type 2 diabetes.

As for type 1 diabetes, dietary and lifestyle factors do not play a part.

Fruits are delicious, partly because they are sweet, thanks to naturally occurring sugars. Because of their sugar content, some people believe that we should avoid eating fruit when maintaining a moderate weight.

This is a myth. Fruits contain a range of healthful compounds, including a variety of vitamins and minerals, and fiber.

Fruit consumption is associated with health benefits, including a reduced mortality rate.

One study concluded that freeze-dried mango “does not negatively impact body weight but provides a positive effect on fasting blood glucose.” Another study found that consuming blueberries enhanced insulin sensitivity.

However, it is worth noting that the two studies mentioned above received grants from the National Mango Board and the United States Highbush Blueberry Council, respectively.

Make of that what you will, but there is no doubt that consuming fruit benefits health. Removing it from our diet to reduce sugar intake would be a mistake.

5. We must eliminate sugar from our diet

Because we know consuming excess sugar is bad for health, it makes sense to reduce our intake. However, it is not necessary to remove it from our diet entirely.

As we noted above, fruits contain sugar, and they benefit health, so cutting it from our diet would be counter-productive.

As with everything in life, moderation is key. With that said, sweetened beverages, such as soda, have associations with several negative health consequences, including kidney damage, cellular aging, hip fractures, obesity, type 2 diabetes, and more.

Cutting soda from our diets would certainly not be a terrible idea.

Despite the rumors, most experts do not believe sugar directly causes cancer or fuels its spread.  Cancer cells divide rapidly, meaning they require a great deal of energy, which sugar can provide. This, perhaps, is the root of this myth.

However, all cells need sugar, and cancer cells also require other nutrients to survive, such as amino acids and fats, so it’s not all about sugar. According to Cancer Research UK:

“There’s no evidence that following a sugar-free diet lowers the risk of getting cancer, or boosts the chances of surviving if you are diagnosed.”

As with diabetes, there is a twist — increased sugar intake has links with weight gain, while overweight and obesity are linked with increased cancer risk. So, although sugar does not directly cause cancer and does not help it thrive, if someone consumes high levels of sugar and develops obesity, their risk increases.

Scientists are continuing to investigate the relationship between cancer and sugar intake. If there are links between the two, they are likely to be convoluted. For instance, the American Cancer Society write:

“There is […] evidence that a dietary pattern high in added sugars affects levels of insulin and related hormones in ways that may increase the risk of certain cancers.”

One study, which included data from 101,279 participants, concluded that “[t]otal sugar intake was associated with higher overall cancer risk,” even after controlling for multiple factors, including weight.

Other researchers have found links between sugar intake and specific cancers, such as endometrial cancer and colon cancer. However, for now, the link is not as solid as the rumor mill claims.

Sugar is a much-researched topic. Typing “sugar health” into Google Scholar brings up more than 78,000 results from 2020 alone. Navigating this amount of content is unwieldy, and, as with any scientific topic, there are disagreements.

Something to bear in mind is that many studies investigating the health impacts of sugar receive funding from the food industry. One review of research into soft drink consumption, nutrition, and health examined the results of 88 relevant studies.

Although there are a number of misunderstandings surrounding sugar, some things are certain: although it might not directly cause diabetes or cancer, eating high levels of sugar is not healthful. Moderation, I am afraid, is the solution.