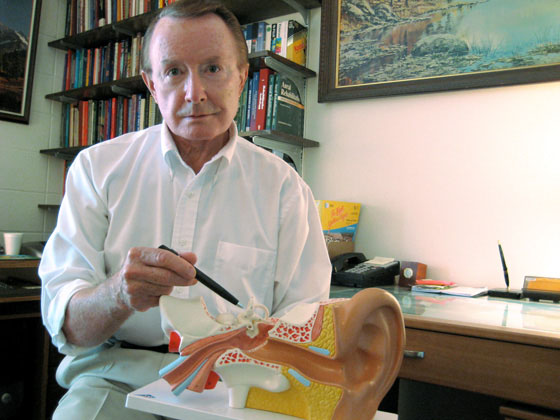 Published on June 1, 2015 from The Hearing Review

Audiology neuroscience researcher Raymond Hull, PhD, a professor of communication sciences and disorders at Wichita State University (WSU), has analyzed the work of international scientists spanning 84 years and found that cardiovascular health affects hearing and the ability to understand speech. Hull’s conclusions on the link between cardiovascular health and auditory function are based on his analysis of findings from 70 different research studies.

“The auditory function impacted by cardiovascular health is problematic because our entire central nervous system needs an oxygen-rich nutrient supply,” said Hull in a recent announcement from Wichita State University. “If it doesn’t get it due to cardiovascular health problems, then it can be affected.”
Hull reports that the connection between cardiovascular health and hearing is a logical one because both the inner ear, which transduces sound into an electrochemical signal, and the brain depend on healthy blood flow. As explained in the WSU article, cardiovascular disease can inhibit the blood and nutrient supply to the inner ear, which receives and analyzes sound. The affected auditory system includes both the brainstem and auditory portions of the brain that interpret what we hear so that it can be analyzed and understood.

Hull’s findings echo recent findings by others exploring the link between physical fitness and hearing health, as covered in a 2-part review by researchers Helaine M. Alessio, PhD, and Kathleen Hutchinson Marron, PhD, in the April 2014 Hearing Review (also see a 2004 article by these same authors).
According to the announcement from WSU, Hull says there are many possible causes of hearing loss, and cardiovascular disease appears to compound the impact of those causes as well as the degree of hearing decline. Some of the studies analyzed by Hull also showed a link between cardiovascular health and cognitive function, which includes higher brain tasks such as the speed and accuracy of decision making, and the uses of language to express oneself clearly. Older adults are most affected by these issues.
“One of the most frustrating aspects of this problem for them is the inability to process what they hear,” Hull said. “Even when the hearing mechanism is working, what they hear just doesn’t make sense.”
According to Hull, a number of studies show that improvements in oxygen exchange and cardiovascular health can result in improvements in the ability to hear and understand speech. One study that Hull analyzed proposed that, even in old age, improved cardiovascular fitness might “turn back the clock…and lead to patterns of auditory processing and cognitive activation that are more similar to the patterns of younger adults.”