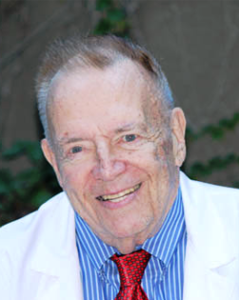 Dr. Cadvan Griffiths graduated from the Columbia College of Physicians & Surgeons in New York and LaSalle College of Law in Chicago. He has held professorships at Columbia University (where he created the groundwork for the development of the vaccine RhoGAM with Dr. Vincent Freda) and the University of California (where he developed the first submuscular approach to breast augmentation and breast reconstruction after modified radical mastectomy surgery for cancer). Also, for the first time, he introduced the one stage abdominoplasty and submuscular breast augmentation through a pelvic incision; a bipedicle muscle flap for the correction of spastic brows; a coronal approach with myomectomy for the treatment of tonic forehead muscles and drooping eyelids; a partical facial nerve resection for the management of spastic muscular neck cords; a temporal arterial flap for the correction of intractable lower eyelid drooping in association with chronic inflammation of the eye, and the re-introduction of a 19th century intraorbital approach for baggy lower eyelids caused by intraorbital fat protrusion ; and, finally, the lollipop mammaplasty for enlarged and ptotic breasts.

With Dr. Edward Pinckney, he challenged the wisdom of the United States government’s endorsement of utilizing polyunsaturated fats in the treatment of elevated cholesterol levels to prevent heart disease arguing with clinical research backup performed by Dr. Pinckney and himself that polyunsaturated fats were carcinogenic; and, if used excessively, would result in an epidemic of breast cancer in women and intestinal or prostatic cancer in men within 20 or more years (This proved to be the case) (Published in the “Cholesterol Controversy”) by Edward Pinckney, M.D. and Katherine Pinckney).

Subsequently, he accused the California Medical Board of denying health providers due process and had his case heard by the Supreme Court of the State of California where his petition was denied.

With the Clearys, he worked tirelessly on anti rape legislation over a period of ten years achieving the eventual support of Governor Dukmejian and Governor Wilson, both of whom intended to veto any such legislation.

As President of the Malibu Medical Society, with his son and Mr. Jeff Stern, a Malibu resident and best selling author, campaigned to end the pollution of the Pacific Ocean by Malibu residents by altering their waste disposal habits. This is still ongoing.

In addition, with the cooperation of the Santa Monica Police Department and the previous experience of Dr. Daniel Hillman, and his son organized for the first time a satisfactory emergency response for the residents of the city of Malibu when such was needed after flooding, mud slides, fires and other natural disasters.

Dr. Griffiths is also a member of the Screen Writer’s Guild West working with the Hursleys for ten years on the soap, “General Hospital” and contributing to several cult movies, among them, “The Thing with Two Heads.” Currently, he serves on the Tort Committee of the American Bar Association, is President of the Medicolegal Defense Trust and National Advocacy Association of Physicians & Surgeons.