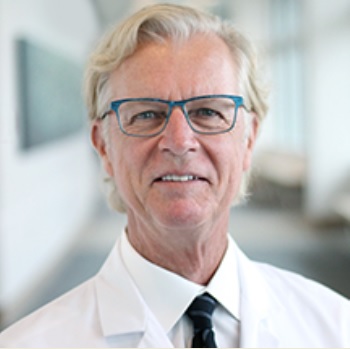 David M. Butler is board-certified both by the American Board of Facial Plastic and Reconstructive Surgery and the American Board of Otolaryngology. He has been a partner of Southern California Head and Neck Medical Group (SCHNMG) since 1988. In 2019, SCHNMG transitioned over to Pacific Eye, Ear & Skull Base Center, Pacific Neuroscience Institute.

Respected and revered by his patients and fellow doctors, Dr. Butler maintains active privileges at Saint John’s Health Center, where he is a past President of the Medical Staff. He is also an Assistant Clinical Professor of Head and Neck Surgery at the University California, Los Angeles, where he received the Clinical Training Award for his dedication to educating young doctors.

Dr. Butler graduated from New York Medical College with his medical degree, where his professors and peers elected him a member of Alpha Omega Alpha Medical Honor Society. He completed his residency training in Otolaryngology – Head and Neck Surgery at the University of California, San Diego Medical Center and served as Chief Resident during his final year.

In addition to his extensive practice experience, Dr. Butler is also a member of several professional organizations, including:

Dr. Butler is a past President and Executive Board Member of the Bay Surgical Society and he has also served as Board Member of the Pacific Oncology Society. His expertise and advanced knowledge have also posted him to consultant positions for California Medical Review Systems, Inc., Transamerica/Occidental and Value Health Sciences, Inc.

A published author of original medical research, Dr. Butler has been a principal investigator in a national multicultural study of new drug applications for sinus and nasal disease. He has been a keynote speaker at national specialty conferences and in Europe, Great Britain and Asia. Dr. Butler has been featured on The Discovery Channel, Brentwood Magazine, and in other print media. He is annually elected to Best Doctors in Los Angeles, Best Doctors in America, Top Doctors and Super Doctor.