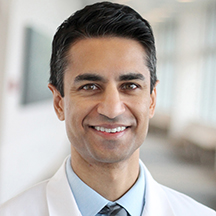 Dr. Abbas Anwar, a native of Southern California, is a board certified otolaryngologist – head and neck surgeon, at the Pacific Eye, Ear & Skull Base Center, Pacific Neuroscience Institute. He specializes in all aspects of general and pediatric ENT and has special interests in sinonasal diseases and infections, head and neck surgery, otologic disorders, and throat complaints. He is well trained in the latest leading-edge innovations in otolaryngology including balloon sinuplasty, CT guided sinus surgery, and microlaryngeal laser surgery.

After medical school, Dr. Anwar completed his residency at the competitive otolaryngology – head and neck surgery residency program at NYU. For 5 years he trained at some of the nation’s finest medical centers in New York City and served as the chief resident during his final year of surgical training. In addition to authoring several journal publications and book chapters, Dr. Anwar was inducted into the Gold Humanism Honor Society for his excellence in clinical care, leadership, compassion and dedication to service.